This game, Taboo Spell, is a fairly different slots game, in that it has an eerie theme of witchdoctors and voodoo spells. The atmosphere and the urban percussive music played in the background, complement the theme of the game, and sets the mood.

The symbols are in keeping with the supernatural theme of the game, and the player will see crocodiles, skulls and tribal masks. There is also a tribal princess and the star of the show, a witch doctor.  The witch doctor is used to give the game the ominous sensation of the magic potions used to cure all ills. The game uses card symbols as well, the cards ranging from 9 through to the Ace. The background to Taboo Spells is dark, the only light being the dim light coming from the tribal torches that light the walls of the cave in the jungle where this game is set.

The Way to Play Taboo Spells

The Pin cushion doll, or the Voodoo doll, acts as the Wild symbol. As is well known in the tradition of voodoo beliefs, the pin cushion doll can be used to represent an individual, and to inflict pain upon that individual from afar. In the game of Taboo Spell, however, the appearance of this doll will bring joy to the player. If five of these Wilds appear across an active pay line the player will win 1,000 coins. It also substitutes for all other symbols, except for the scatter, to complete any winning combinations.

The scatter symbol is represented by the Taboo Spells icon. This pays out if two or more of the Taboo Spells appear across the reel at the same time. This can award the player with up to 50 times the original bet.

The Witch Doctor makes his appearance with a free spins bonus game, which is unusual in slot games in that it is completely randomly awarded. This bonus game is called the Witch Doctor Free Spins. Once this game is activated, the player will receive six free spins with all tribal masks and crocodile symbols turning into witch doctor symbols and thereby increasing the chances of a big win.

Taboo Spells does not have as many bonus features as some other slots games. There is no progressive jackpot, but there are many good opportunities to win a big payout. 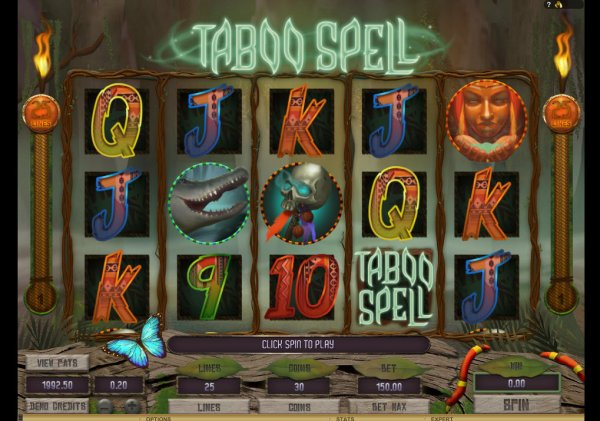 The Rules of the Game

The rules of this game are simple. The player can put down a bet of 30 coins per pay line, and there are 25 pay lines. The maximum bet that can be placed is sizable, and this will appeal to all high rollers with large bankrolls. The game options will pertain to sound effects, special effects, coins, credits and quick spin. The player may also select the expert mode in order to adjust wagering and pay lines like in various online slots Singapore.

The animations of Taboo Spell are classy and at the level of Hollywood. The presentation of all elements is excellent and well crafted, the symbols are well done.  All the modern features are included that will encourage the player to investigate this mysterious form of medicine. The music is also appropriate to the supernatural theme of Taboo Spells.