Play N Go is a well-respected casino software developer, and is the platform responsible for the Crazy Cows video slot. It is set on a farm that seems to be somewhere in rural America. Play N Go is known for a humorous, enjoyable and quirky style, and the cartoonish style and friendly cows in this slots game definitely live up to this.

The reels are set in a wooden casing, and are set against a sun-drenched farmyard with a big red barn and a well. The most valuable regular symbols in the base game are 3 different cows as well as a sweetcorn. In an interesting twist on the usual playing cards, the lower-value symbols are the letters that spell out the word CRAZY. To take the game theme even further, the letter symbols all bear farm-inspired embellishments and the soundtrack features the plucking of banjo strings.

The 5-reel, 15-payline game can be played for free as well as real money, which means that it can be played to win money, to practice or to enjoy without any financial pressures. When placing real wagers, players can bet as little as 0.1 or as much as 18.75. The theoretical RTP is 96.17%, which means that the base game’s Top Jackpot of 2500x the total stake is always worth playing for.

To maximise the possibilities of winning when playing real money, it’s also possible to activate the AutoPlay feature like many players choose while playing online pokies in NZ. This keeps the reels turning independently so that players can carry on with other things at the same time. Crazy Cows also plays just as smoothly on mobile devices as it does on desktops, for even more convenience in today’s busy world.

The Wild Symbol in the game is a big brown bull, which can replace all standard reel icons to help make up winning combinations and will expand to fill all of Reel 3’s positions if it lands there. The only images that the Wild can’t replace are the Scatter Symbol in the form of a straw-hatted dog and the barn Bonus Symbol.

The barn triggers the High Dive Bonus when it lands anywhere on Reels 1, 3 and 5. This is an enjoyably interactive extra feature, where players need to choose a cow to perform a high dive that is judged by the dog. An amount of Free Spins and a coin prize are given, the size of which depend on the rating that the dive got. 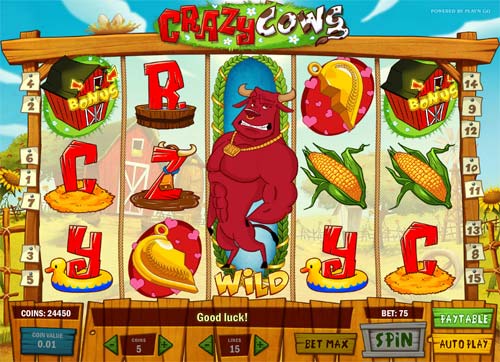 Any wins in this round are subject to a 2x multiplier, and this is increased by landing more dogs. The bonus can also be retriggered for a maximum of 50 spins. More free spins can also be triggered by landing an expanded Wild on Reel 3 and two locket symbols that make a pair on Reels 2 and 4. The expanded Wild will stay in place for the duration of the Free Spins, and landing more locket pieces triggers more Free Spins.

For a final flourish of excitement, players are also allowed to try and boost their winnings after every successful spin with the Gamble Feature. They can try to double or quadruple their payouts by correctly guessing the colour or suit of a playing card.

Getting it right retriggers the Gamble Feature, and it’s possible to play 5 times in a row. Losing means that players have to forfeit everything, which adds a thrilling element of risk to the game.